Teams, debates and recruitments: what becomes of TEDxMontpellierBS?

A team of 16 students driven by a common cause

A few weeks ago, Montpellier Business School students obtained the license to create TEDxMontpellierBS, an association to organize a series of independent conferences with the aim of disseminating impactful ideas around 3 themes: feminism, ecology and History.

Lucile, a final year student of the Grande Ecole Program and part of the team that saw the birth of the project explains: “The aim of these conferences is to communicate ideas around contemporary issues that concern the greatest number. These three themes are linked to the values ​​we share with the school: CSR and diversity.”

A representative team of students of all Montpellier Business School programs was then formed. This was best explained by Jules, the final year student who initiated the project: “We organized our task force around a group of 16 students with complementary skills: from digital to entrepreneurship through human resources. We will be recruiting a 17th member soon to complete the communications team.”

Building a community for the April 8th, 2020 event

Built as a start-up, the TEDxMontpellierBS association is now stepping up its actions in preparation for the event of April 8th, 2020, during which a dozen inspiring conferences lasting fifteen minutes will take place. Jules thus left for the United States to participate in the TEDWomen event: “I had the opportunity to participate in several training workshops to recruit speakers as well as possible and thus organize a real experience for participants on D-Day.”

Jules adds, “The goal was also to get a start in the TED community. It is not a question of enriching its network, but of really making meetings with the common objective of disseminating culture and information.”

Pending the opening of the ticket office in mid-February, the TEDxMontpellierBS team is still recruiting a few speakers and sponsors. To follow all of their news, go to:

TED Circles: a new concept of debates led by the Apostrophe association

Manon, president of the Apostrophe association of Montpellier Business School, an association that promotes debate and eloquence on campus, explains: “TED Circles is the new concept of TED and aims to meet in a small group around a TED video, then to debate on the ideas put forward. “

The first edition took place on Tuesday January 7th and brought together the first participants around the theme of “the future”. “The debates focused on education, responsibility and intergenerational issues. Everyone was able to discuss their life goal, their relationship with risk taking and the heritage they wish to transmit to future generations. »Concludes Manon.

To follow up on the success of this first edition, the two associations are preparing the next TED Circles meetings while awaiting the new conferences on April 8th.

All the news
Get contacted 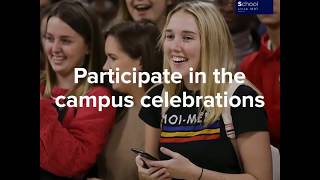